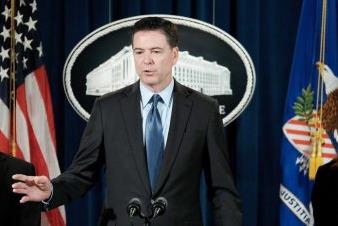 FBI director James Comey has called for public debate on the use of encrypted communications, claiming Americans may not realise how radical groups and criminals are using the technology.

Mr Comey’s comments in a blog post appeared to seek further public support for his view — first expressed last year — that improved encryption being developed for digital devices could hinder the efforts of US law enforcement and intelligence operations.

While the FBI chief’s comments sparked criticism in the tech community and among civil liberties activists, Mr Comey said US citizens may not realise how Islamic State (IS) militants used encryption to avoid detection.

“When the government’s ability… to see an individual’s stuff goes away, it will affect public safety,” he wrote on the Lawfare blog. “That tension is vividly illustrated by the current ISIL threat, which involves ISIL operators in Syria recruiting and tasking dozens of troubled Americans to kill people,” he wrote using another acronym to refer to the militant group.

“It is a process that increasingly takes part through mobile messaging apps that are end-to-end encrypted, communications that may not be intercepted, despite judicial orders under the Fourth Amendment.”

He added that criminal probes may also be affected because “there is simply no doubt that bad people can communicate with impunity in a world of universal strong encryption”.

The FBI chief and other US officials began expressing concern last year after Google and Apple announced plans to lock communications, leaving keys only in users’ hands, in a way that would prevent access by law enforcement even with a warrant.

Those moves came after an outcry over revelations from former intelligence contractor Edward Snowden exposing vast electronic surveillance programs by the US and its allies.

Mr Comey said in his blog post that “the logic of encryption will bring us, in the not too distant future, to a place where devices and data in motion are protected by universal strong encryption… in such a way that permits access only by participants to a conversation or the owner of the device holding the data”.

He noted that “there are many benefits” to encryption, saying it can protect “our innovation, our private thoughts, and so many other things of value, from thieves of all kinds”. But he added that the public should consider the trade-offs of allowing access to the government under certain conditions.

“Democracies resolve such tensions through robust debate,” Mr Comey said. “It may be that, as a people, we decide the benefits here outweigh the costs and that there is no sensible, technically feasible way to optimise privacy and safety in this particular context.”

“Those are decisions Americans should make, but I think part of my job is make sure the debate is informed by a reasonable understanding of the costs.”