A tiny new tracker designed to monitor bee behaviour is being tested by ecologists at Kew Gardens in London.

It is made from off-the-shelf technology and is based on equipment used to track pallets in warehouses, said its creator Dr Mark O’Neill.

Readers, used to pick up a signal from the kit, are connected to Raspberry Pi computers, which log the readings.

The tracker consists of a standard RFID (radio frequency identification) chip and a specially designed aerial, which Dr O’Neill has created to be thinner and lighter than other models used to track small insects, allowing him to boost the range.

The engineer, who is technical director at the Newcastle-based tech firm Tumbling Dice, is currently trying to patent the invention.

“The first stage was to make very raw pre-production tags using components I could easily buy”, he said, “I want to make optimised aerial components which would be a lot smaller. I’ve made about 50 so far. I’ve soldered them all on my desk – it feels like surgery.”

The average “forage time” for a worker bee is around 20 minutes, suggesting they have a forage range of around 1km (0.6 miles) , Dr O’Neill explained.

The idea is to have readers dotted around a hive and flower patch in order to track the signals as the bees move around freely in the wild.

The tiny trackers, which are just 8mm (0.3in) high and 4.8mm (1.9in) wide, are stuck to the bees with superglue in a process which takes five to 10 minutes. The bees are chilled first to make them more docile.

“They make a hell of a noise,” acknowledged Dr O’Neill.

He told the BBC he hoped that the trackers – which weigh less than a bee and are attached at their centre of gravity so as not to affect their flight – would remain attached for their three-month expected lifespan. 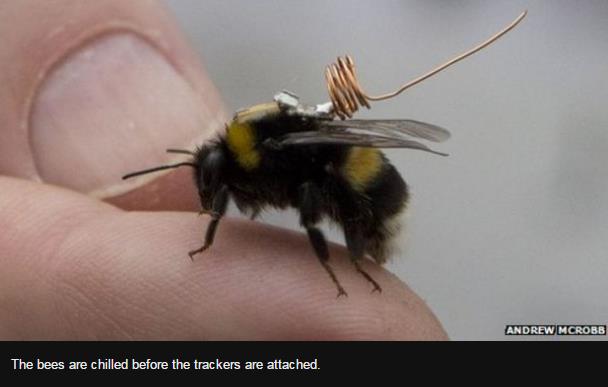 They have only been fitted to worker bees, which do not mate.

“If an animal ate one, I guess it would have a tracker in its stomach,” Dr O’Neill said.

“But the attrition rate for field worker bees is very low. Most die of old age – they are very competent, and good at getting out of the way.”

“These tags are a big step forward in radio technology and no one has a decent medium to long range tag yet that is suitable for flying on small insects,” she said.

“This new technology will open up possibilities for scientists to track bees in the landscape.

“This piece of the puzzle, of bee behaviour, is absolutely vital if we are to understand better why our bees are struggling and how we can reverse their decline.”