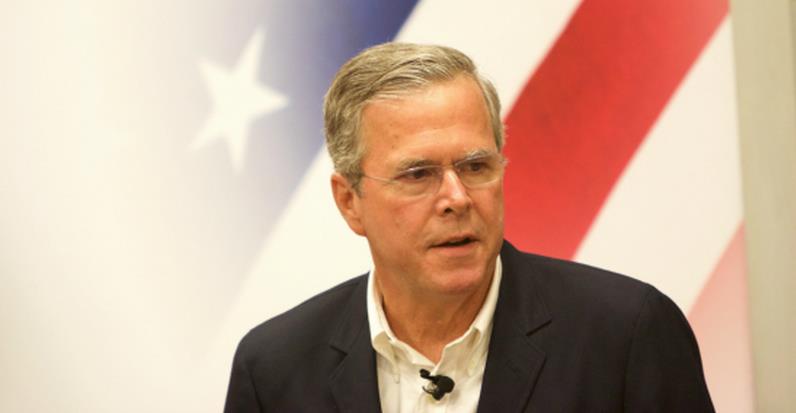 Bush, the former governor of Florida, said Tuesday that encryption “makes it harder for the American government to do its job.”

That job would be, according to Bush, “making sure that evildoers aren’t in our midst,” echoing a phrase frequently used by his brother President George W. Bush to describe the threat of radical Islamic terrorism.

If you create encryption, it makes it harder for the American government to do its job – while protecting civil liberties – to make sure that evildoers aren’t in our midst.

Governor Bush’s comments were delivered at a forum hosted by a lobbyist group called Americans for Peace, Prosperity and Security (APPS) with close ties to military contractors, that is pushing presidential candidates to adopt “hawkish positions,” according to The Intercept.

(APPS’s advisory board includes members of what you might call the National Security establishment – including a former national security advisor to George W. Bush and a former CEO of BAE Systems. Its honorary chair is Mike Rogers, formerly the chairman of the US Congress’s Permanent Select Committee on Intelligence.)

Bush also advocated for wide latitude for the NSA to continue collecting phone metadata, although the NSA’s surveillance powers over Americans have been curtailed by Congress.

There’s “no evidence” that the NSA abused its powers or infringed on civil liberties of Americans, Bush said.

In fact, Bush said, in the clash of surveillance and civil liberties, “the balance has actually gone the wrong way” – meaning that civil liberties have too much weight.

There’s a place to find common ground between personal civil liberties and NSA doing its job. I think the balance has actually gone the wrong way.

While some US officials have advocated for technology companies to give law enforcement backdoors to read encrypted data, many security experts and tech companies say such a move would jeopardize security for everyone.

Others have pushed for some sort of middle ground, such as a multi-part encryption key that would keep encryption safeguarded by multiple agencies or companies holding part of the key.

Bush falls into this middle ground category, saying at the APPS forum that Silicon Valley companies (like Google and Apple) should cooperate with the government.

We need to find a new arrangement with Silicon Valley in this regard because I think this is a very dangerous kind of situation.

In response to Bush’s comments, some in tech and media suggested that Bush doesn’t really understand encryption. 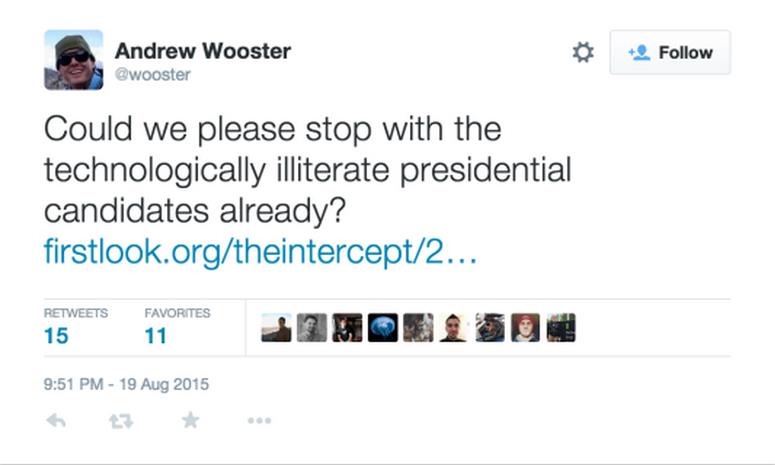 The presidential politics of cybersecurity

As the 2016 US presidential election contest has heated up this summer, we’re reminded that cybersecurity isn’t just about technology, it’s also about policy – and that makes it highly political.

It’s still quite early in the election cycle, but cyber issues have taken up a good bit of the debate so far.

At a 6 August Republican debate, two contenders – Governor Chris Christie and Senator Rand Paul – clashed on NSA powers, with Christie claiming that the government needs “more tools” for fighting terrorism, and Paul arguing that the US Constitution requires a warrant for collecting data from Americans.

On the Democratic side, former Secretary of State Hillary Clinton has largely avoided the issue of NSA surveillance, while her chief rival, Senator Bernie Sanders, has called the NSA activities exposed by leaker Edward Snowden “Orwellian” and “clearly unconstitutional.”

Beyond encryption and surveillance, the cyberthreat from China has also taken up a lot of air time, with Republican candidates Mike Huckabee and Marco Rubio calling for retaliation against China over its presumed involvement in cyberattacks on the US government.

Clinton didn’t go as far as Huckabee or Rubio, but talked up the threat of Chinese economic espionage in a speech last month in which she also claimed that China wants to hack “everything that doesn’t move in America.”

A lot of important policies affecting privacy and security of Americans – and others around the world – will be decided by the next US president.

If you care about any of these issues – encryption, surveillance and the powers of law enforcement; privacy rights; government oversight of the internet and telecommunications; and laws that affect everything from data breach liability, to the rights of security researchers to hack things – it’s time to tune in and make your voice heard.