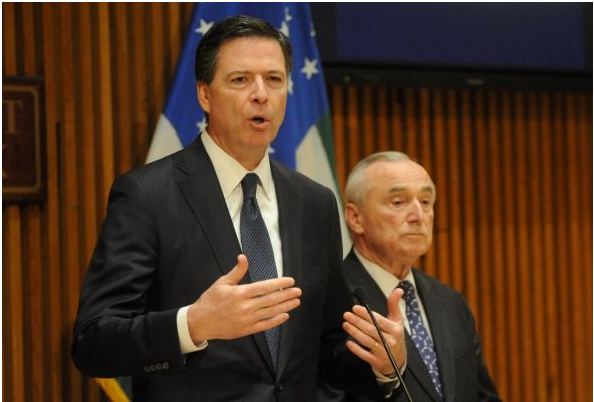 The couple who killed 14 people and wounded nearly two dozen others this month in California chatted secretly of jihad long before they married or entered the United States, not on social media as politicians have claimed, FBI Director James Comey said Wednesday at a Manhattan law enforcement conference, where he urged the public to remain alert for signs someone close to them is being radicalized online.

Comey said those messages between Syed Rizwan Farook and Tashfeen Malik were direct, private messages well before their attack in San Bernardino, California.

“So far, in this investigation we have found no evidence of posting on social media by either of them at that period in time and thereafter reflecting their commitment to jihad or to martyrdom,” he said, referring to the reports suggesting that Malik had spoken openly on social media about jihad and that background checks had not detected those comments.

Comey made his statements at 1 Police Plaza, first at the NYPD Shield Conference, which included several hundred security personnel who work in the private sector and who collaborate with the NYPD, and again at a news conference.

Comey revealed for the first time that the shooting deaths last July of five people after attacks on two military installations in Chattanooga, Tenn., have now officially been classified as a terrorist attack. The assailant in that attack, Muhammad Youssef Abdulazeez, a naturalized U.S. citizen living in Hixson, Tenn., was killed by police gunfire after he shot and killed four Marines and a sailor and wounded three other people.

The White House on Wednesday said President Obama plans to visit San Bernardino on Friday and meet with the families of shooting victims there.

Comey said he understands Americans are jittery, but citizens should try to channel their awareness into vigilance, not panic. He said the threat from the Islamic State group, known as ISIS or ISIL, has not changed — but it’s vastly different from how terror cells operated around the time of the Sept. 11 attack. “Your parents’ al-Qaida is a very different model and was a very different threat that what we face today,” he said.

For example, he said, some Twitter messages cannot be “unlocked” by law enforcement, making it impossible for them to track communications between terrorists.

Comey said Farook and Malik communicated via encrypted email which investigators have not been able to crack.

“The bottleneck here is there are a lot people who have designed these products and they can’t access it themselves because that is what the market requires,” Comey said. He said he hoped further public debate on encryption will convince the public to accept that unlocking encryptions is needed by law enforcement to battle global terrorism.

Comey said the messages relayed from foreign terrorist groups are as succinct as “I will kill where I am.” Comey said such messages have inspired homegrown terrorists, who are receiving these messages on their phones daily.

Comey also urged the public not to “freak out” because they are anxious about another homegrown terrorist attack. Instead, he said, “We need the public to be aware and not to be fearful, but instead have a healthy awareness of their surroundings and report something if they see something. Tells us [law enforcement], because we need your help, and then live your life and let us do our job.”

NYPD Commissioner William Bratton echoed Comey’s comments. “To prevent crime, disorder and now terrorism we must go where it begins . . . in the minds of those who hate and feel victimized. People who see this are moms and dads.”

Bratton said the terrorists are “propagandizing messages that are slick and professional and are inspiring attacks.”